At the time I took this photograph, the Third Avenue Bridge in Minneapolis was closed for a major reconstruction project. In the original photograph, before creation of this stylized version, the side of the bridge appeared to resemble a fair from the Middle Ages. I decided to work with it a little more to see what else I could turn this photograph into. I used a filter that follows mainly straight lines in the image and turns them into fibers of colorful light. I am able to adjust how the effect was applied by changing the opacity, hue, vibrance and other attributes. I enjoy how the reflection of the bridge is picked up in blue color in the water. In a word the photograph has “pizzaz” that it did not have before. I am a grandfather but this is not your grandfather’s bridge photograph!

This item is for sale on the external shop for Ric Rosow. 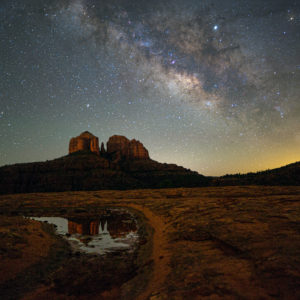