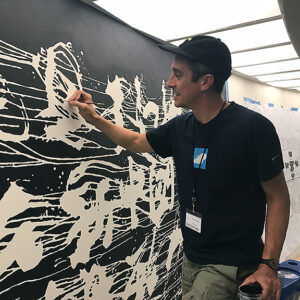 Mr. O’Brien spent the formative years of his life performing with his family in a number of circuses throughout the United States, including the Ringling Bros. and Barnum and Bailey Circus, Clyde Beatty Cole Bros Circus, and the Shrine Circus. When his parents retired from the ring and settled in Central Florida, Liam continued to perform, but this time as a Costumed Character at Walt Disney World’s Magic Kingdom.

In 2006 Liam moved to New York City and worked as a production manager for a number of prominent Fine Artists including: Takashi Murakami, Michael Riedel, and Mickalene Thomas. The artwork that he produced with these artists are in a number of notable art collections and have been exhibited in major museums and galleries throughout the world!

In 2013 Liam started painting signs and murals for local businesses in his Brooklyn neighborhood. This endeavor started with him going door to door with a hand full of fliers… but eventually his craft garnered more interest and attention. Select clients include: The Guggenheim Museum, The Brooklyn Museum, Sweetgreen, and the David Zwirner Gallery. A hand painted sign can offer a business a level of sophistication and charm that cannot be captured in vinyl; each sign is its own unique work of art!

Mr O’Brien currently lives/works in Minneapolis, MN with his wife and young daughter. He enjoys going to the movies, fixing things, and painting/drawing.

Seamus Liam O'Brien putting the final touches on the mural at the Guggenheim Museum, NYC.