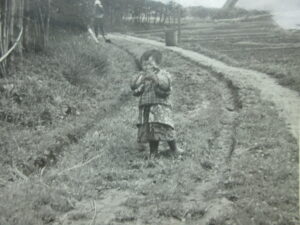 Image: Life After The War

I became interested in photography during the three years I was stationed overseas with the USAF.  After experimenting on my own for a brief period, I enrolled in the New York Institute of Photography correspondence course and developed a serious interest in photography.  During my last several months overseas, I biked the back roads of Japan photographing places and people I met along the way.  Additionally, I explored sports, portrait and figure photography. I compiled several albums that I packed carefully and sent back home compliments of the service – unfortunately, my shipment got lost and was never recovered. I was left with a number of pictures that were not included in the albums, primarily because I was unhappy with the exposure during printing but didn’t have the heart to throw away.  I had access to a well-equipped dark room on base and I enjoyed developing and printing my pictures as much as I enjoyed taking them.

I enrolled in the University of Minnesota upon returning home.  I had intended to pursue a degree in photojournalism, unfortunately, it was not offered at the U of M and I wound up with a BS degree in Business.  I did some minor wedding and family portrait work during my time at the university – neither of which appealed to me much.

Quite a few years intervened where responsibilities limited my ability to pursue my photographic interests. Happily, I now find I have the time to pick up my camera and delve into my primary interests – photojournalism, portrait and figure photography.

The Gallery pictures were taken in the early 1950’s at the end of the US occupation of Japan and the conclusion of the Korean war.  I look forward to adding new pictures to the gallery.

DION does not currently take online orders. Email or call for purchase information.

Life After The War